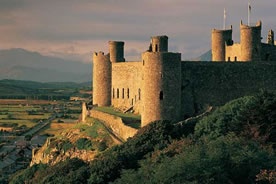 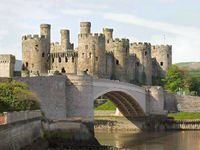 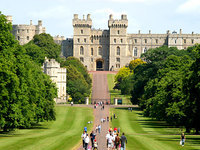 Arrival in England, drive to your first night accommodation.

175km.
Your Castles of England and Wales tour starts by heading west from London just a relativly short distance to Windsor Castle, still used today by Her Majesty Queen Elizabeth II and is kept in almost perfect condition. Visit the place where Prince Charles married Camilla and see a few more highlights before continuing west to stay overnight near a castle that even today, still resonates with England history and is the only Tudor castle of England to be open as a hotel… kings and queens have stayed here.

90km.
Touring continues with medieval castles, crossing the River Severn to see the castles of Wales – the “Land of Castles”, visiting one of Britains oldest castles, Chepstow Castle and then to a “motte” castle, Caldicot before ending the day in the capital city of Cardiff itself where, in the city centre, the castle’s enchanting fairytale towers conceal a splendid interior.

100km.
Tour north today to visit Caerphilly Castle which is one of the most impressive medieval castles of Wales and also the second largest. (Second only to Winsor Castle and making it the largest in Wales). Lord Tennyson, the poet, described it as “it isn’t a castle – it’s a town in ruins”. Then on to Raglan Castle to see the remains of the 15th century moated fortress with its huge hexagonal keep. The surrender of this castle in 1646 to the parliamentary forces marked the end of the English Civil War.

U overnacht in: Ross on Wye

Free day at Ross on Wye.

U overnacht in: Ross on Wye

220km.
Spend a little time today seeing Monmouth castle then tour onward to mighty Goodrich Castle, which stands majestically on the sandstone crag above the River Wye valley. Continue touring north to pass through the Snowdonia National park for your overnight stop.

70km.
Visit the World Heritage site that is Harlech Castle, set on the cliffs overlooking Tremadog Bay. This is one of the “iron ring” of fortresses built by Edward I and during the War of the Roses inspired the song “Men of Harlech”. Continue to the walled town of Caernarfon where the castles battlements and towers command the entrance to the Menai Straights. Stand on the spot where Prince Charles was invested as Prince of Wales.

160km.
East today, touring along the coast to Conwy to see one of the best preserved medieval fortified towns in Britain with Edward I ’s great castle, 200 historical and listed buildings and the engineering marvels of Thomas Telford’s 1826 suspension bridge, Robert Stephenson’s 1848 tubular railway bridge and the relatively modern road bridge that span the River. Continue to spend the night near another castle that is also a hotel.

200km.
William the Conquerer’s Warwick Castle has few rivals in scale and grandeur as it towers over the River Avon. Medieval re-enactments bring this castle to life and you will spend most of the day here being facinated with England history. Overnight in Stratford upon Avon, home of William Shakespeare

230km.
By-pass London and continue south to see Bodiam Castle in East Sussex. This castle – which is more of a fortified house - dates from 1385 and was recently voted as Britains 4th most popular castle.

U overnacht in: Royal Tunbridge Wells

100km.
Move on to Dover Castle, which commands the shortest sea crossing from France. The castle was built in the 12th century but has been Britain’s most important defence since the Iron Age. The underground tunnels date from the Napoleonic wars as well as World War II. Overnight in charming Canterbury with it's majestic cathedral.

160km.  Return to London today via Leeds Castle in Kent, which has been the residence of six of England’s medieval queens as well as a Norman stronghold. In London, visit the Tower of London, one of the worlds most famous and spectacular fortresses that also combines prison, mint, arsenal and jewel house.

Last day of this trip: Return home via plane or ferry 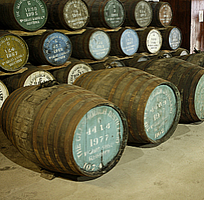 All of Wales and the Southwest - 15 dagen
Bekijk